“You should journal the process of a fight camp.” That was Dana, several times, during the middle of my last few fight camps when things were getting crazy. Things always get crazy in some way during fight camp. Every fight and the entire period of training before it and the post fight fallout is full of a lot of highs and lows and Dana had mentioned the idea of keeping a journal of the experience at least three times before I decided to actually do it. With the exception of only a few missed days, I woke up every single day and the first thing I did was sit down and write about my training, how it was going and some of the thoughts in my head as I went about the process of preparing for my world title shot. I don’t know what I plan to do with the entire piece of work but it currently sits at 86 typewritten pages and over 47,000 words with more to be written. Regardless of my lack of a final plan for what has turned into a fairly considerable amount of writing, I am very glad that I did it. The experience has been revelatory on a personal level making it already worth the effort.

Following my final day of hard training for the fight, I am looking at the day’s entry where I expounded on what this title shot means to me. What I wrote doesn’t even capture the full picture but it reveals a little of what it has taken to get this opportunity and I felt like it deserved to be shared with anyone who cared to read it before the match takes place. If it adds to a fan’s investment in the outcome then that makes the fight more entertaining and that is the purpose of holding these events in the first place. Every single fighter has their own backstory and motivations for stepping in the ring on August 24th. For anyone who reads this and is able to attend or livestream the event, keep that in mind while you watch!

(I started the journal with outlining my actual training from the previous day. Afterwards, I found myself writing about my more personal feelings on what this fight means to me and why. The following is what I wrote.)

“To take this in a different direction now, I was thinking about the world title and what it means to me. For all the trouble I am going through to get it, it begs the question of why I am doing this and what it would mean to me. Everyone has their own personal motivations and mine are spread out over many reasons. I’m not getting paid. I risk failure. It has been difficult and I haven’t even fought yet. I risk injury. It takes my attention away from growing my business thus literally costs me income. It requires a lot of sacrifice from not just me but also my wife and daughter as they support my efforts. There has to be some internal motivation to want to go through this process or I wouldn’t be here writing this.

When I look back at my life, I think about how unlikely it is that I got to this point. Having a kid at sixteen added a level of adversity to my progression through this sport and in life in general that made it highly unlikely that I have done what I have managed to do. I remember wondering what I was going to do when I finished school. At times, I thought I had lost the opportunity to follow my dreams. That said, I was a naively idealistic young guy and went for things that many others may have thought were too risky or unlikely to work out. Against all odds, I have found a way to make a living in the field I love and somehow have even climbed the amateur rankings to afford me this opportunity to fight for the world title.

If I look back, I see a 16 – 19 year old kid who at one point was going to high school full time and working somewhere between 30 and 35 hours a week. I started martial arts as my one and only hobby that I would spend my pitiful amount of expendable money on but only had time to go to the dojo on Tuesday nights for the first year or so. I would go in and do my private lesson then stay for the group class afterwards. For the rest of the week, I would train by myself at home.

I finished high school and became a full time student at college where I was studying to become a teacher. I had progressed in Kenpo, the martial art I was studying, far enough that I got some part time work teaching. I did that during my year in college and during the following summer break, I decided to quit college and teach martial arts full time. I had performed well enough in school and wasn’t concerned about it being too difficult but I simply wasn’t motivated to continue down that path. It may have been a naive choice but I had realized I just didn’t want to be a schoolteacher. I wanted to run a dojo. Everyone older than me probably cringed at the choice and thought I was a fool. Maybe they were right but I was seeing all kinds of 35 to 60 year old men with beer guts in jobs they tolerated and didn’t love. They made decent money but their best stories were from when they were teenagers and in their young twenties. I was in my early twenties and hadn’t even had those fun times they regaled me with. I was already “adulting” with the best of them and I was looking at an empty existence in which I woke each day to go do a job I didn’t love for “the good of my family” and “financial security”. That was all well and good for some people but the thought made me sick to my stomach. It felt like waiting to die instead of truly living.

I taught full time for four years until I eventually shared the position of operations manager of the dojo with another fellow named Jason Boyd for a period of 3 more years. During that time, I got in the ring and lost my first match by split decision but then went on to win my next three in a row. I didn’t have a coach talking me through all the complexities of competition. I agreed to my own matches and I set up my own training regimen. My cornerman, Jason Boyd, had a total of zero fights and we didn’t even know how to properly wrap hands. He was knowledgeable about martial arts and was a calm presence in the corner but we really had no experience and thus were flying by the seat of our pants. I still somehow accumulated those 3 wins in succession through the excellent training I received from my first kickboxing coach, Jason Chinnick. Due to personal reasons, he had never stepped into any striking competition himself but his knowledge of technique was superlative and his ability to teach was incredible. I also ingratiated myself into training sessions with Gabriel Varga and his group of people who were kind enough to take a chance on this new guy who didn’t even have proper bag gloves and wore fingerless MMA style gloves for pads. I just listened to everything they and others of experience said. I literally tuned into “The Ultimate Fighter” and studied how they trained and handled their fight camp. It was a patchwork model of how a fighter does what he does but we made due and performed well in spite of ourselves.

The “Cole’s Notes” version of what happened between my fourth fight and now is that I got antsy about my future and took a job in sales where I made much better money for 4 years. I lost two fights during that period because I couldn’t reconcile training with work demands. After four years out of the martial arts field, I was miserable and felt stifled. I opened my own little club and called it Martial Arts Unlimited and started with two days a week just to see if I could scrape my way back into the market. To my delight, it grew it to the point I could lease a space full time shortly after which, I lost my job and took a shot at making a go of supporting myself just with the business income instead of doing the sensible thing and seeking a new job. With the support of good friends and hyper-disciplined money management, we somehow survived and after three and a half years on the sidelines, I stepped back into the ring to make a comeback. I lost that fight but I proved to myself I still had fight in me and I took my losing record of 3 wins and 4 losses to what it is now; a humble 10 and 6 in kickboxing and 2 and 0 in boxing. I took hard fights. I won most, lost a few but overall, my efforts have earned me this opportunity.

I could go much deeper into the history of how I got here but the point is that it has been a mostly self-directed journey with what has felt like the odds stacked against me and the fact that I am 6 days away from fighting for a world title of a legitimate sanctioning body, even an amateur title, is an astounding achievement won through a combination of perseverance, talent, the support of amazing people and a healthy dollop of dumb luck. I feel obligated to fight for this title. I’ve come so far and won this opportunity and to not go for it with everything I have would be a disservice to all of the people who have aided and believed in me. I want to win this thing for all of them! I would also be doing a disservice to myself. I want to win this thing for me. I feel strong, confident and ready to make good on my promise to myself to be the best version of me that I can be.” 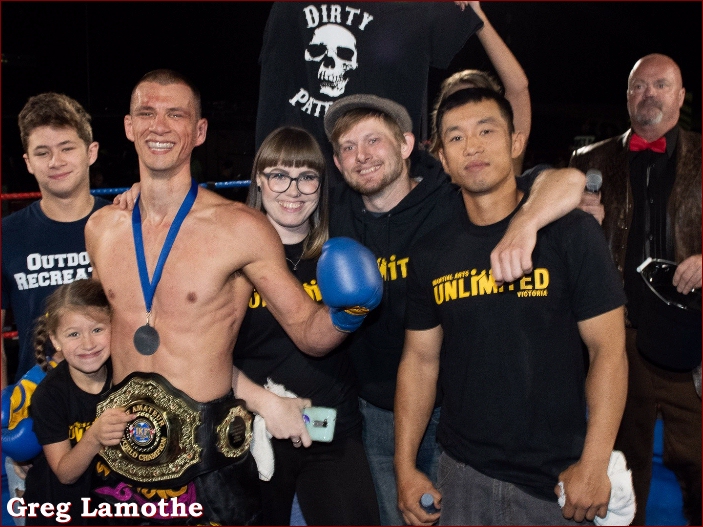